Bremen – Series production of the new E-Class Coupé has started at the Mercedes-Benz plant in Bremen. This latest addition to the successful E-Class family follows the Saloon, the Estate and the All Terrain off-road variant, which have been rolling off the assembly line at the Sindelfingen plant since last year. A long-wheelbase version of the new E-Class is built for the Chinese market at the company’s plant in Beijing.

“The production start of the E-Class Coupé is part of the ongoing rejuvenation of our model range and continues our growth path”, commented Markus Schäfer, Member of the Divisional Board of Mercedes-Benz Cars, Production and Supply Chain Management. “The new Coupé offers our customers the most intelligent technology, together with a range of high-quality features. We implement this variability into our production flexibly, efficiently and in top quality. During the start-up phase, we were able to benefit from the excellent collaboration between the plants in Sindelfingen and Bremen.”

Technically based on the Saloon, the sporty and exclusive Coupé marks a next step in the evolution of the Mercedes-Benz design language. At the same time, it offers the intelligence of the E‑C lass family with full smartphone integration, Widescreen Cockpit and the latest driver assistance systems with the option of, among other things, partially automated driving. Powerful engines with low exhaust emissions and comfortable suspensions with selective damping provide the guarantee of a sporty and agile driving experience. The Coupé is already available to order and will be on its way to customers from spring 2017. 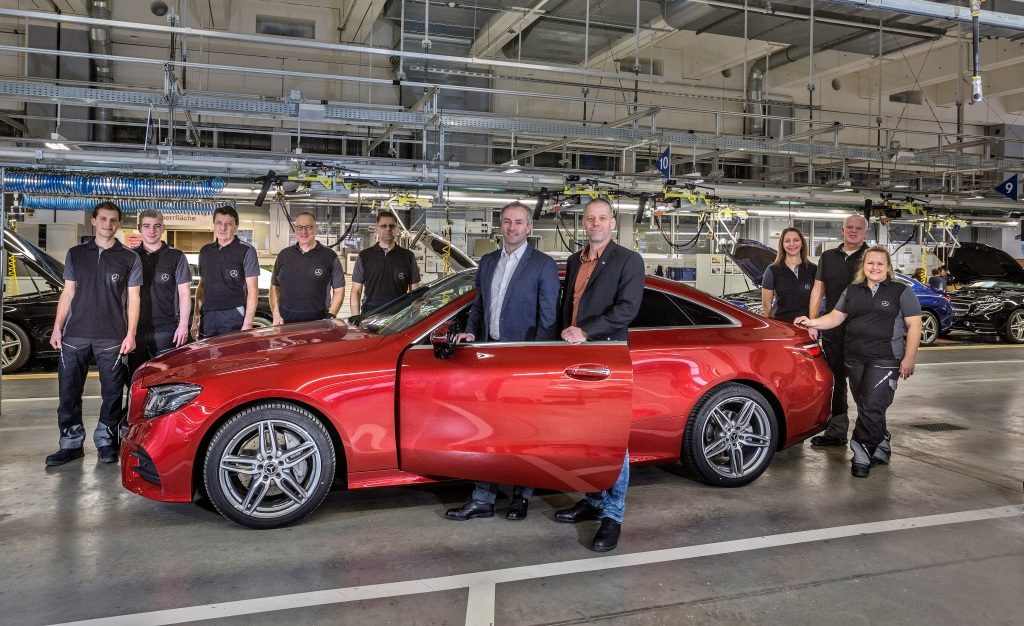 The new E-Class Coupé is produced at the Bremen plant as part of a flexible system alongside the C-Class Coupé and C-Class Cabriolet. The team was able to integrate a further start-up into the running series production in a very short space of time, while the plant is working to full capacity. “The new E-Class Coupé is a further top-of-the-range model that is set to enhance the contemporary appeal of our product portfolio at the Mercedes-Benz Bremen plant,” says Peter Theurer, Site Manager of the Mercedes-Benz Bremen Plant. “The ability to build such a diversity of models in Bremen is made possible by a highly flexible production system and intelligent manufacturing concepts, for example by producing all our Coupés and Cabriolets on one line. Once again, the team in Bremen has demonstrated superb flexibility and speed while also, from the very start, delivering Mercedes quality.”

The Bremen plant currently produces ten different models, and thus the highest number of variants of any plant within the Mercedes-Benz Cars production network. By the end of the decade, the list of vehicles “Made in Bremen” will encompass the full range of intelligent drive systems – from the classic combustion engine and plug-in hybrids through to fuel cell and electric vehicles.

“Together with our colleagues, we are excited about the successful start of production of the new E-Class Coupé and the resulting positive perspective for the site in Bremen,” says Michael Peters, Chairman of the Works Council at the Mercedes-Benz Bremen Plant. “It’s always a great achievement bringing a new vehicle onto the streets. Each start of production – and we had a lot of them in the past – proves that our experienced colleagues meet new challenges in a highly professional way.”

The new E-Class Coupé is available with a wide range of features, requiring an intelligent production system. During the development phase, the feasibility of the various steps of the production process was tested through a virtual assembly. A start-up team from Bremen contributed to optimise the efficiency and ergonomics of the production process with their experience and know-how they gained with previous model series.

The production of vehicles to customers’ individual specifications is underpinned throughout the assembly process by an intelligent logistics concept. Driverless transport systems deliver baskets containing the precise components and parts required for the individual vehicle to the production line, where they are fitted without the need for intermediate buffering. The high level of variance means that virtually every vehicle is unique.

A further factor contributing to the successful series integration of the E-Class Coupé was the close cooperation between Bremen and Sindelfingen. During the start-up phase, the Bremen team had recourse to the experience gained by their colleagues in Sindelfingen with the new E-Class model series, for example with regard to introducing new testing procedures for the complex electronic systems in the Coupé.

About the Mercedes-Benz Bremen plant

The Mercedes-Benz plant in Bremen is the biggest private employer in the region with more than 12,500 employees. Ten different models are being assembled here at the moment: the Saloon, Estate, Coupé and Cabriolet of the C-Class, the Coupé and Cabriolet of the E-Class, the SUVs GLC and GLC Coupé as well as the two Roadsters SLC and SL. In 2015, the plant was rewarded as “ Factory of the Year” in the category large-scale production. As lead plant of the C-Class, Bremen directs the worldwide production of the highest-volume model series in the plants abroad in Tuscaloosa/USA, Beijing/China and East London/South Africa. The assembly of the new GLC is also directed by Bremen as the main production site.